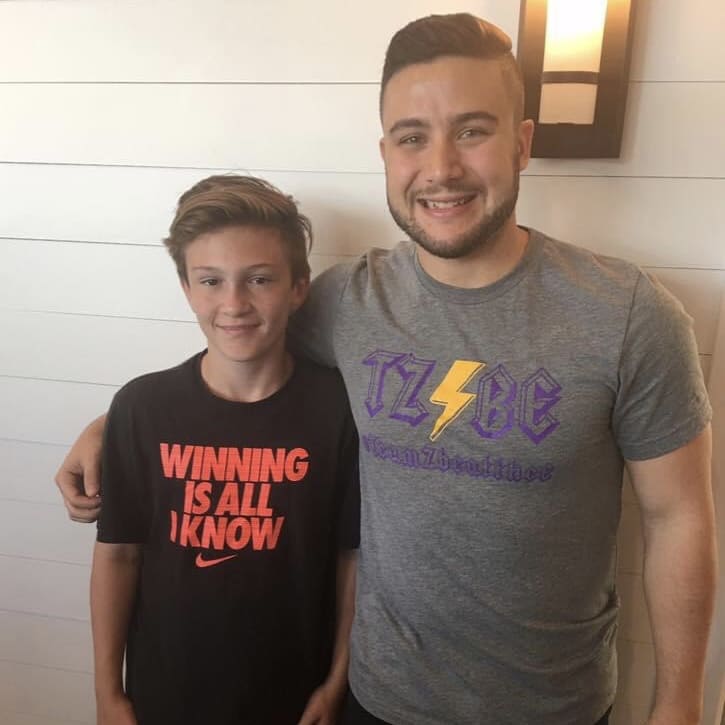 “About a year ago my son Kaden suddenly started having panic/anxiety attacks. They would come out of now where and would just rock us to the core. One day we were at home, it was a non-school day, his brother, Kaden and I were watching TV and suddenly out of the blue he has a massive panic attack. I tried my best to calm him but even with my nursing background I could not bring him back down. We had to call an ambulance. He cried and held my hand so tight and kept asking me if he was going to die. It was heart wrenching. To watch your son in such turmoil, scared to the core and thinking he was going to die was almost more than I could bare. It weighs so heavy on you as a mother when you are so completely helpless to help your child as they beg for the answer. We had another emergency room visit for his attacks and they would not prescribe anything or help my son. We tried contacting his primary Dr. they didn’t want to address his issue until we had a diagnosis. It was so difficult to try and get someone to help us. I felt completely lost. We reached out to the psychologist his brother would sometimes see and she was willing to help us. She did give him some guidance as to attempting to deal with and control his attacks, but they still would come. Kaden was constantly afraid, didn’t want to go anywhere in fear he would have a panic attack and be embarrassed. They hardest was bedtime, he had night time attacks often and could hardly get to sleep which then affected him at school. I was hesitant to just medicate my son, there is a strong family history of medication side effects so I was really searching for an alternative solution.

Then a friend of mine told me about Congruent Life Chiropractic. I was skeptical at first, but searching for answers, something to ease Kaden’s emotional state and mine. I called and right away Maddy made me feel at ease and assured me they could help. Our first visit with Dr. Mike was more than I could have ever imagined. It was like he already knew what our family was going thru. I honestly felt the weight start to lift from my shoulders. Many times as a mom, you take on your children’s burdens like your own and the weight of it you just bear. It’s what we do without even realizing how much stress and weight it puts on us and our own stresses and emotional wellbeing. I was in tears.

After just a few visits I could tell in Kaden he was less anxious. With each additional visit I started to realize the attacks were happening less and less. The panic attacks were less severe. Kaden’s whole body seemed to be changing, he was able to think clearer and gain some control again. He was smiling again. We started our journey with Dr. Mike in Feb and by spring time he was virtually panic/anxiety attack free with no medication.

Summer started and we realized he had not had an attack for weeks, then a month and now its October. A new school year has begun and Kaden is still attack free. Kaden was put to the test 2 weeks ago, he had a significant injury that scared him pretty badly. He and I were sitting together right after the incident when he looked up at me and said, “Mom, I feel an attack trying to come, but I got this. I’m ok.” Not only did he have clear thinking in a stressful moment but he was able to identify what he was feeling and able to control it.
Since starting Congruent not only have the anxiety and panic attacks subsided but Kaden has had better health as well. Last year he was in the Dr’s office numerous times for strep, even with no tonsils he is prone to it. It would wear his body down and he would have no energy for days, feeling awful. We are happy to report he has had zero strep since starting with Dr. Mike. Kaden is also able to fall asleep right away at night and his school work has improved. He no longer has to worry about anxiety and can focus on school work. Kaden’s confidence has jumped leaps and bounds this year and we contribute much of this to Dr. Mike and we will forever be thankful.

We are so forever grateful for the recommendation to Congruent Chiropractic. We feel so welcomed every time we open their door. The office is not a traditional office. Every person, every child who enters is happy. No one is ever a stranger, everyone freely talks to each other even if it is the first time you have encountered them. Not only do Maddy & Victoria greet us but they honestly talk to us. When you enter Congruent you are not customers, you are family. Dr. Mike not only talks with and treats Kaden but he checks in on his brother and mom too. Dr. Mike makes you feel at home every single time. Sincerely a very relieved mom, Jenn”